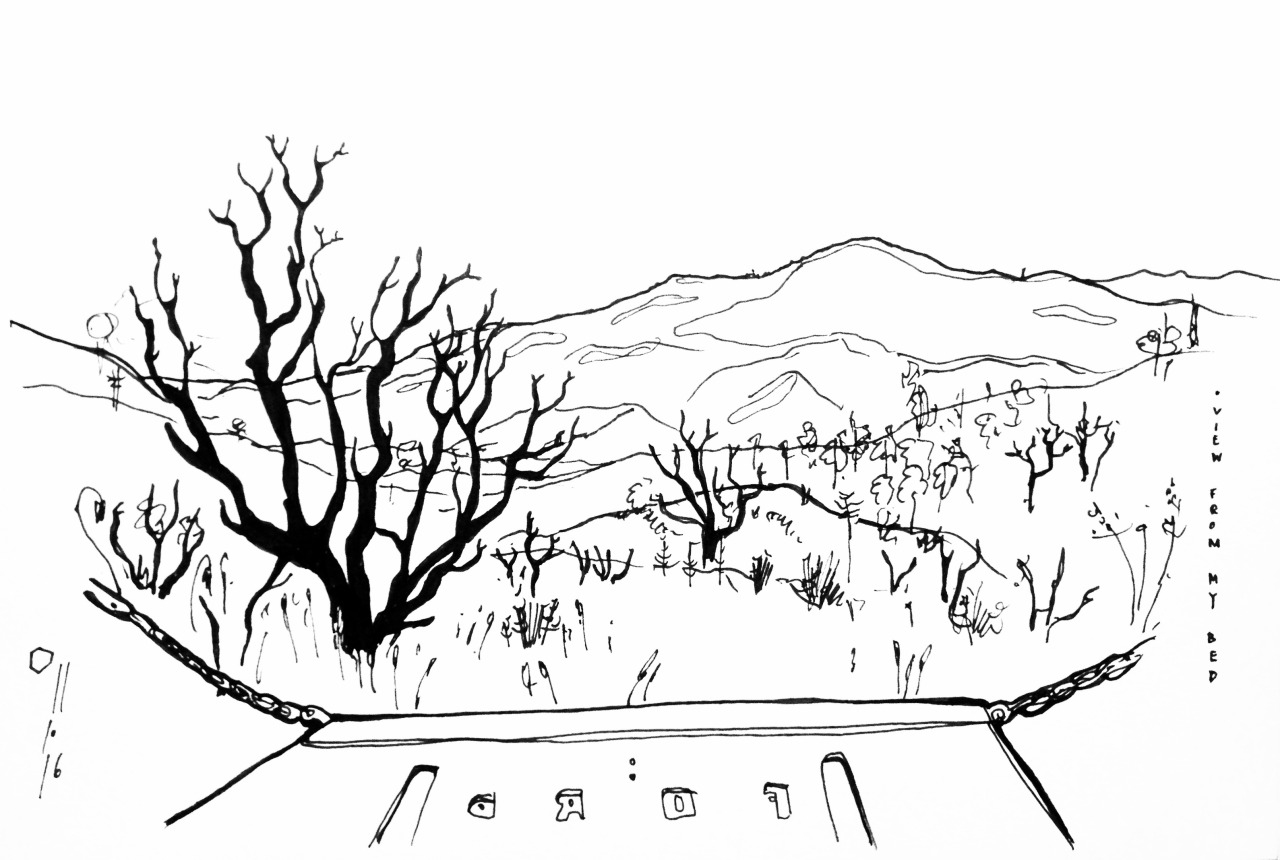 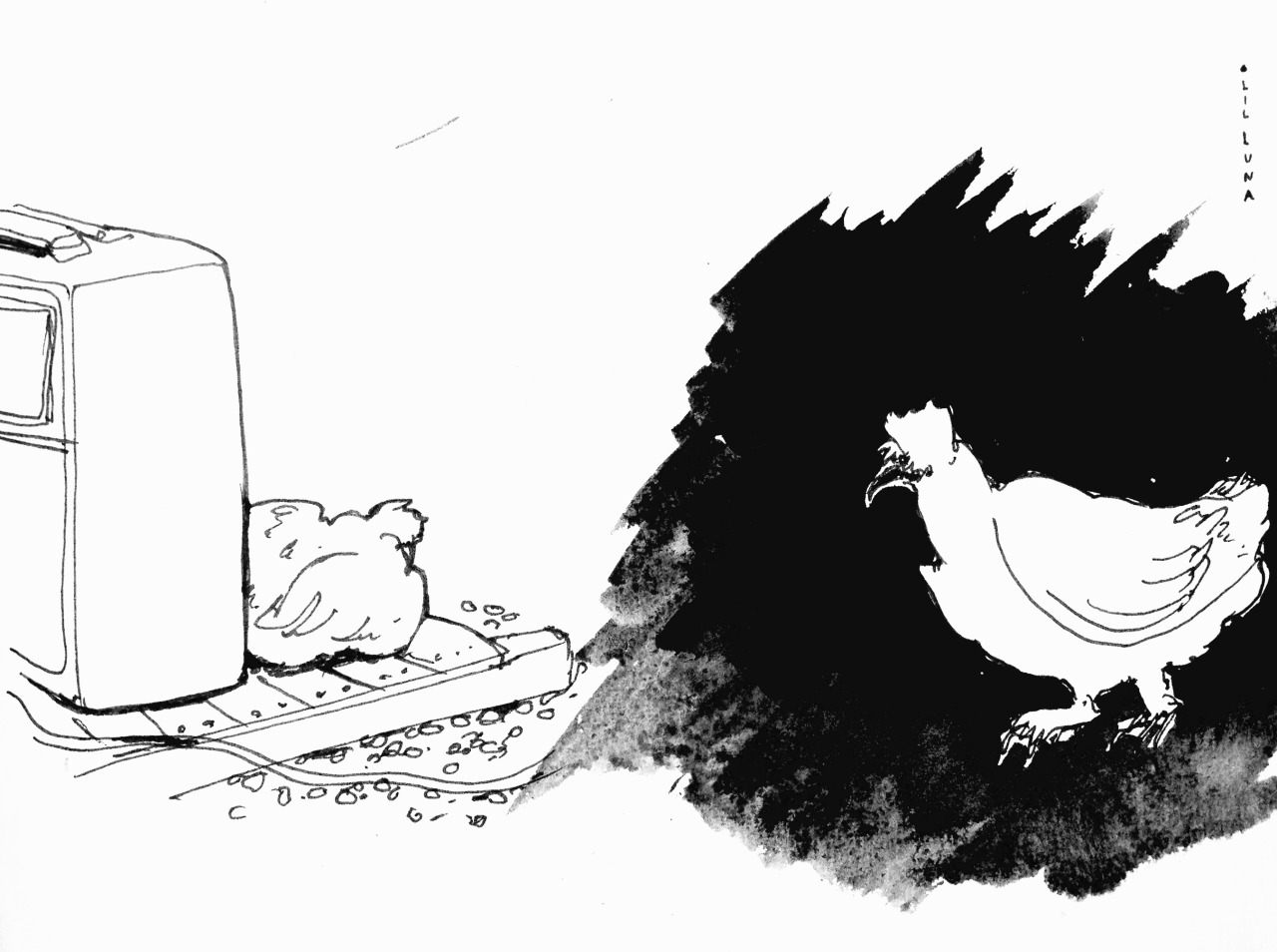 I am back from living in the mountains off grid for two months. Earlier than I planned, though – life has it’s own ways of guiding and sometimes quite roughly setting the tracks to choose from. But once again I witnessed how death unites the living and gives rebirth and boost to the collective dreams.

One of these dreams is Ravens Landing – what used to be Ravens 7th Haven – a community-project Layna Joy Rivas had built in 7 years and which burnt all down in hours – the wild fire in August 2015 destroyed (almost) everything and showed that there is no safe haven, but more as an inspiring place for the artists of all kind to land, step out from the ordinary patterns and co-create. A place to think and act as whole, instead of as a separate other. Anyway, there are no others.

After the fires, Layna drove cross-country and travelled to get back the clarity of her purpose.

I was traveling too – a year ago, in November, while walking in Annapurna mountains in Nepal, I sat down to draw and a flock of over 30 ravens appeared and started spiraling over me. It was beautiful and a bit terrifying as well, as I got a flashback from my childhood, watching Hitchcock’s “The Birds” at night in my summerhouse in the woods of Estonia. Anyhow. At that moment I promised to myself, if Layna decides to rebuild Ravens Haven, I will help any way I can. 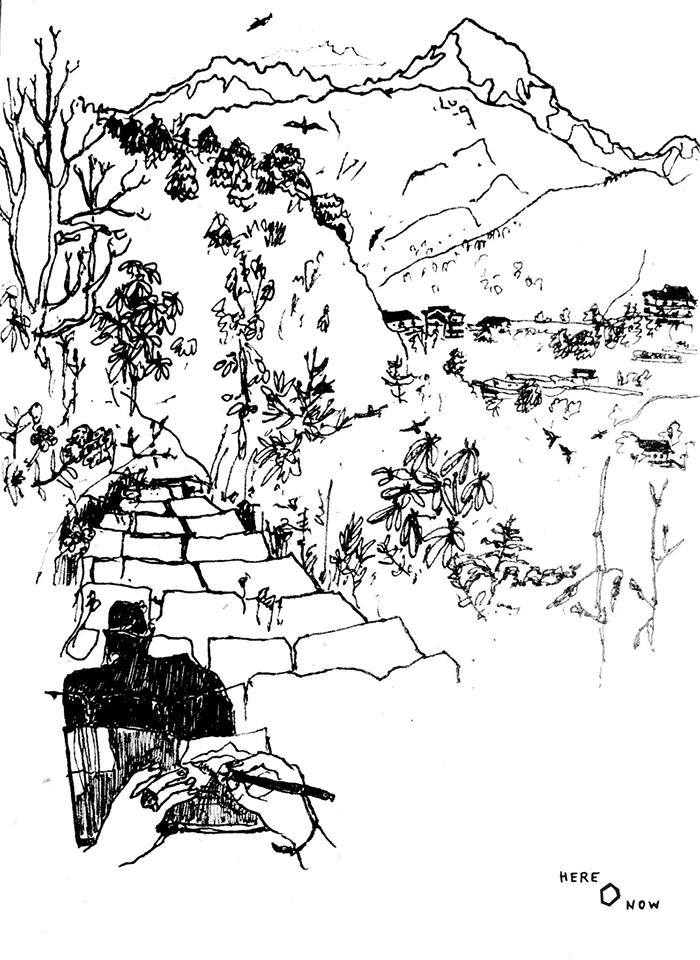 Sure enough, she returned in Spring 2016 to the mountains and saw the pond full of water and all the hills covered with grass and colorful flowers. Also, some of the burnt oaks were coming back to life, growing new leaves. And most of all – the ravens had stayed and kept on cruising above the land.

She and her partner Izek started building again on this clean, a bit apocalyptic canvas. I joined them for a week in April and for longer period of time after this year’s Burning Man.

Ravens Landing is open for investors and self-reliant artists to land and co-create, as Layna decided if she rebuilds the community this time, she would not do it alone. In the dream it has always been a meeting point for artists of all kind.

One of the future ideas is to build a professional music studio into one of the hills. It would be a place for bands and producers to work and record, while living in the mountains – in the nature, but at the same time close to small towns and two hour drive to San Francisco.

As we all love to cook, learn new recipes and serve dinners – organizing dinner parties with celebrity chefs is on the list. We just finished handmade outdoor kitchen and the dining hall with an observation deck, overlooking the valley, is already under construction.

Izek is a pilot and makes his own planes, so we need a big shop for the big projects, as we all love to fly and build and welcome all kind of artists to prepare their projects for Burning Man for example!

There are a lot more ideas and actions in mind and in progress. If you are reading this and feeling inspired, contact: reiskaeva[at]gmail.com and laynajoy[at]icloud.com

The African proverb in the heading of this post is reminded by one of the mentors and investors of Ravens Landing now.

Stories in Drawings grew out from Ravens 7th Haven and is always supporting the land, people and ideas (now) Ravens Landing carries. 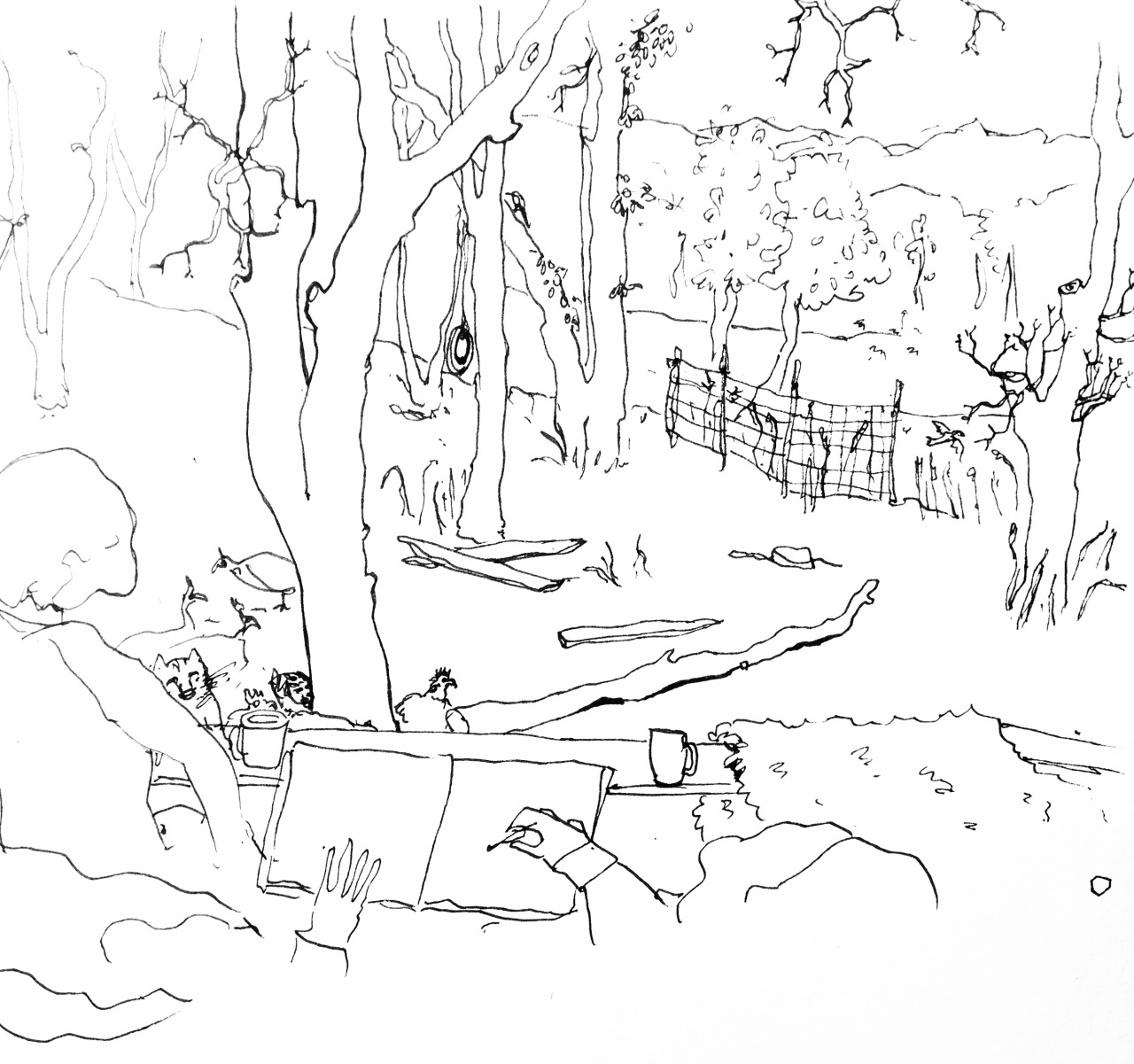 ° One morning on a terrace with Layna, welcoming another day of rebuilding. ° Izek skinning a dear. Once on his way home, he saw a truck hitting and killing this dear, so he picked the dead animal from the road and brought it with him. The stretched skin sounds like a good drum.